Craft has a lot of beautiful samples that are used for the needs of the people. In particular, the Kazakh people have one of the most needful and most widespread crafts, such as spinning a web, weaving the various carpets, inkle, baskur, alasha, sakva, dishbag and tekemet, stitching a syrmak, making a Gobelin. The production of various wool products belongs to the category of a particularly important profession of the Kazakh traditional material culture. Traditional Kazakh carpet weaving and the manufacture of textiles made of wool and felt were widely developed in the Atyrau region in the past centuries. These include such diverse products as sakva, kerme, horse stall, bag, bag for bedclothes, bojah, atzhabkysh (blanket for horse), pillow (zhastyk). To date, these products, especially, types of bags, sakva are made by order only in special workshops by means of cutting ornaments from various fabrics.

Alasha. It is made of 24 rows of strips weaved with red, red-yellow, green, and blue spun threads. Along the stripes, the kazmoiyn pattern was repeated in red, green, and blue, alakurt ornament are also included. Both sides are framed by a red-yellow shag. The resident of Kosshagyl village of Zhylyoi district of Atyrau region Z. Bekbauova handed over to the museum in 2013. 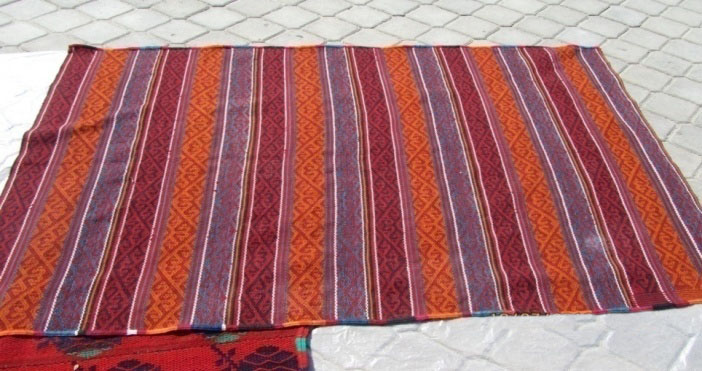 Alasha. It is weaved with woolen threads of red, yellow, blue color by the method of zhuz teru. Ornaments of the koshkar muiiz and karmak are double knitted to the alasha weaved of 18 stripes, stripes are seperated by a white-colored ireksu pattern. Both sides of the alasha are framed with sup woolen threads of blue, red, yellow, black, white, light red. The resident of the city of Atyrau Zh. Zhetpisbayeva handed over to the museum in 2001

Tufted carpet. It was made in Shiyeli district of Kyzylorda region in 1970. There are four black shatyrgul ornaments with one water, two fences pattern, fringe from both edges on red carpet. The birds, mouse footprints, square patterns are placed inside the shatyrgul ornament, the rooster is imaged in the center of the two shatyrgul. The outside is blue, yellow synykmuyiz, kosmuyiz ornaments edged. The edge is ornamented with white tis pattern, in two rows, sharshy, kosmuiiz ornaments are threaded around the two red and yellow rows on the edge. Black woolen threads were knitted around the upper edge, and fringes were made from the line thread on both sides. The resident of Atyrau city Y.Yerkingaliyev handed over to the museum in 1999 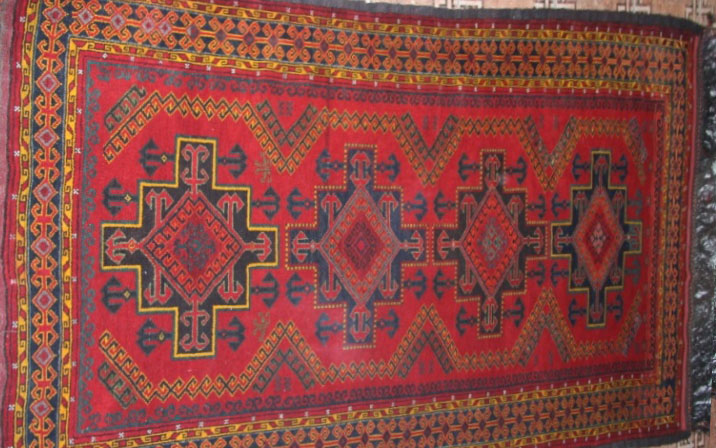 Tufted carpet. It was made in Shiyeli district of the Kyzylorda region in 1970. The bottom part has weaved with four samyrgul ornaments, has four waters, one fence image, and a red carpet with fringes on both sides. Baldak, tisti sharshy, kosmuiyz ornaments are imaged in black samauyrgul ornament. The kosmuiyiz ornament is horizontally placed outside. The shield is black, yellow, and blue karmak, kosmuiyiz are ornamented in two rows and bottom part is framed with kosmuiyiz ornament. Ashamay, itkuiryk ornaments are placed in two rows on the whole edge of the carpet. Koshkarmuiiz and botakoz ornaments are formed symmetrically between them. Two upper edge of the carpet are made of brown wool thread. At both ends the stripes are weaved of the woolen threads of red, brown color, the fringes are made of wrap thread.

The resident of Atyrau city Y.Yerkingaliyev handed over to the museum in 1999.

Syrmak. Woolen yarn. There is a red shet, kusmoiyn ornaments around the syrmak surface, green koshkar muiyiz ornaments are imaged. The same ornament is repeated in the support. A resident of Atyrau city Y.Yerkingaliyev handed over to the museum in 2000. 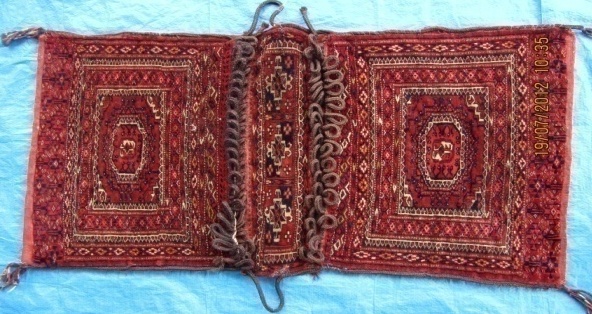 Sakva. There is a multiple leaf pattern in two rows in the center of the dark red sakva knitted by shaggy weaving method, blue, yellow ashamay ornaments are applied to red background. The semi-transparent appearance of this ornament is knitted to the armpits, and it is ornamented around the edges with alakurt, alamonshak patterns. Two side patterns are made in four rows on a red stripe, on the back there is a geometric and zoomorphic ornament of yellow and red color. The frilling made of round brown braided cords are covered along the length of the two sides, for tying the mouths of the pockets a round braided tie are weaved. A hairy fringe is tied at the corners, and the back is tightly knitted from a red woolen thread without hair. The resident of the Akkiztogay village of Zhylyoi district of Atyrau region N Sissembayev passing in 1992.

Sakva. There is a yellow, black, red sharshy (quadrant) ornament in the center of the sakva pockets knitted by shaggy weaving method, botagoz ornament is knitted in the center of the sakva and multiple stripes are applied using yellow, black ireksu ornaments.  Along the edge, a red and yellow alamysh ornament is applied in two rows, synyk muiyiz (broken horn) ornaments are made inside a square (sharshy) ornament knitted with red, brown, yellow threads. The frilling made of round brown braided cords are covered along the length of the two sides, for tying the mouths of the pockets a round braided tie are weaved.The skirt is covered with geometric synyk muiyiz (broken horn) ornaments, two rowed red, yellow tumarsha ornaments are applied by aligning method, edge is covered with its (tooth), ittaban (dog foot) ornaments. The back side is tightly knitted without hair. The resident of Kosshagyl village of Zhylyoy district of the Atyrau region Zh. Taganova handed over to the museum in 1982.